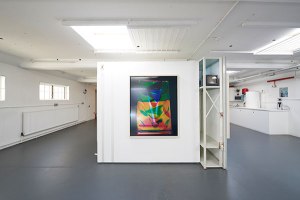 When you enter the room the first thing you see is that all of the walls have been drawn into the centre of the space and bound together. The Fig-2 mobile wall structures and book shelves that usually delineate a space within the room have been wrapped up together, and there is nowhere to hide.

Whether deliberately or intuitively Sylvain Deleu’s photos don’t zoom in on the the central structure but show it surrounded by the exposed space of the studio — balancing the tight compression at the centre with the openness around it. This arrangement has an unsettling effect. Artist Una Knox notes that in drawing things together you illustrate the potential for, or the inevitability of, the opposite: all things will break apart. 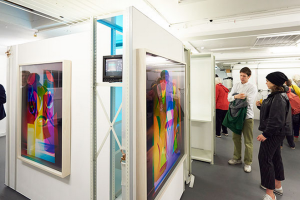 This is the context of coming to Fig-2: these shows are brought together for seven days and then blown apart. For Week 40 of Fig-2 Una Knox has bound together elements of film, photos and sketches within a specific spatial configuration that introduces specific tensions into how you perceive the work.

“In previous works the question has come up: how does a particular architecture have the potential to dictate a conversation?”

Whether it’s an elevator shaft or a small room full of tape and paint like the ICA studio, depth of field (the distance between the nearest and furthest objects you can perceive) has a profound effect on you. In cities we can get wound up and depressed by the closeness of everything, and feel relief and elation at emerging into a wider perspective like a park. Conversely, in the countryside we can feel overwhelmed by the distance of everything and long for our homely corners. 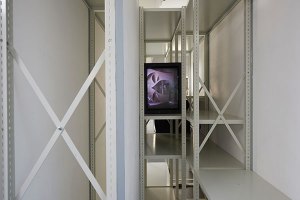 In Una Knox’s Fig-2 installation the objects are brought into intimate relation with each other through proximity, and looking at them all cramped together feel like we’re clambering through them, unearthing them like old manuscripts in a library. 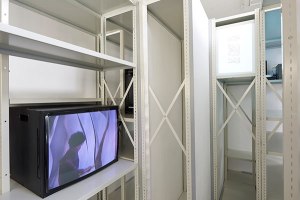 The small monitor screens play video archives of the artist’s father David Knox, himself an artist, at work in the 1980s. He’s making ‘surface studies’ in which he introduces cuts to large pieces of paper. This work doesn’t survive except in these grainy flickering video documents.

There is also a notebook hidden away that contains preparatory work from both father and daughter, work you wouldn’t normally see when looking at a final work. It presents us with one dynamic of a relationship we can only imagine, and sketches for works that might or might not exist. If there’s a depth field of meaning we’re coming towards a wall here. 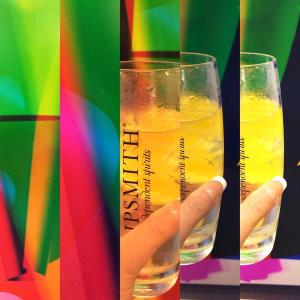 Exploding the plane is the most colourful part of the exhibition, the three large trichromatic images, semi-abstract photos of Una’s own absent cutouts. You see these from the outside, from the open space of the room, whereas with the other works you have to almost clamber into the central structure. These large photos are made using pre-colour photography processes, with three sequences shot one after another and different tones of grey creating different densities of red, green and blue.

This paradoxically creates much more vibrant colours out of gray than using colour does. You’ve seen films shot in Technicolor. Their rich saturated image palette comes from using three separate film cameras each with a different filter to capture red, green and blue. It’s nostalgic and also, such complex methods of image creation are akin to the workmanlike methods of artists. So there’s another connection between the processes of Una’s photos and David’s physically cutting into paper. 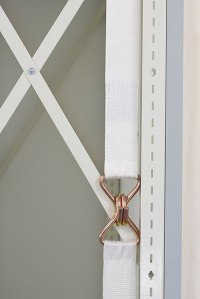 It’s about “history and how things taken from the past are modified and reshaped and retain something of what they were and become something else and how two things that are the same can become unique.”

Cutting into paper breaks the two-dimensional plane, which is quite a radical act in artistic terms. It’s violent. Interplay between two and three dimensions is an abiding feature of op art, which creates three-dimensional effects through manipulating and tricking the cognitive processes that read the information of the world: optical illusions. The vase keeps popping into a face.

“I was interested in the way that we look back in history and what we see through these different layers of media, these practices of artists who we can only see through documentation and what happens in that filter, so I wanted to bring those filters to the foreground, in accentuating the quality of this old video but also in the photographs splitting apart the materiality of photography but also of vision and how these things come together, sequences in time collapsing in and becoming dense. So you see that in the structures and also in the materiality asking you to look through the shelves.”

There’s nothing on the internet about David Knox. The show is about someone we as strangers can’t hope to know about. When you click on @UnaKnox in @fig2london’s tweets it says “Account suspended” — the correct handle @unannox has protected tweets. In the absence of the internet, or getting to know Una Knox, all we can know about the relationship between the two is mediated through the work.

This seems to echo a psychological truth that sets up an unresolved ambiguity in the work. Sometimes we can fail to understand something because we are ‘too involved’ as well as too far away: ‘clinical distance’ is another kind of knowledge. It’s a problem of perspective, of depth of field: everything is either too far away, in time or space, or so close up to you that you can’t see it. Art breaks the surface plane so we can try to peer through. 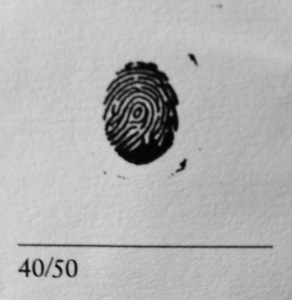 All quotations from Una Knox are taken from her audio interview with Fig-2 curator Fatoş Üstek.

The Sipsmith gins at the show opening were apparently a “Trichromaticism mix” but I have a photo in which it’s distinctly referred to as “Smoke & mirrors”. Smoke and mirrors: certainly I’m now beyond confused not only about David Knox, but also Una Knox, and even the drinks.

One artist bio of Una Knox says “She is inspired by instances where an absence defines a presence” which we certainly encounter, or don’t encounter, or do we, through her work. It’s also a central idea in contemporary art practice that I’ve had hours of fun mocking. For once I’ll just leave off the jokes and think about Jazz. Simpsons did it:

PUNTER: Sounds like she’s hitting a baby with a cat.
LISA: You have to listen to the notes she’s not playing.
PUNTER: I can do that at home.