I’m still not sure whether I should have gone to see this with two archaeologists (proper archaeologists, that is, as opposed to a dabbler like me). Possibly one can either approach art in an experiential sense or an analytical sense, and you don’t get to make the same approach twice (not for the first time, at least) and that night, the night of the sloe gin with warmed apple juice, we were all wearing analytical hard hats.

Week 7 was a collaboration between Claire Hooper and Maria Loboda, apparently originally titled “Atheism”, which seeks to “capture the atmosphere of the archaeological dig” and examine the relationship between objects, human interpretations and reinterpretations of them and the elusive movement of all these things through time. As Hooper points out in her accompanying interview, it is our extraordinarily structured brains that allow us to conceive of past and future – the only thing that actually exists in our direct experience is the “Now”. What this means is simply that we can have no firm idea about the meaning an object held even last year, never mind millennia ago in eras when writing either did not exist or was used solely for recording the delivery of sheepskins. The reality in which an object held a particular meaning no longer exists, and is at best only partially recorded. Our brains irresistibly tug us towards the desire to know what we cannot know: how other (dead) people feel about Things. Archaeology, and art that plays on and is inspired by archaeology, is the ultimate optimistic challenge to this troublesome limitation of our tediously locked-down space-time dimension.

Space can also be tricksy. Experiencing the space where ICA holds Fig 2 several times over now, I am slightly more accustomed to what is the Art and what is not, but my friends were seeing the space for the first time. It occurred to me that in approaching the thing as archaeologists we were in essence trying to decode a space from scratch, exactly as you would in the field. Part of field archaeology is about making decisions, often snap ones really. What am I looking at? What else does this look like? What are the things that matter here? Nothing comes out of the earth labelled, and fine art exhibitions generally aren’t labelled either. In archaeology and in art therefore, your ability to decode a space grows with practice.

The whole exhibition is built around a sort of temple, Claire Hooper’s evocation of a “god storage unit”, a place for storing old idols that was created in the ancient Mesopotamian city of Uruk when the great temple of Inanna was rebuilt with new statues and fixtures. Hooper’s re-imagination of the storage room is lined with watercolour wallpaper, elegant both artistically and archaeologically in that it is based on stratigraphic drawings from the site report, which have their own complex beauty. Hooper was intrigued by the idea of objects that were felt still to have some power, but which were no longer in active use. Nobody wanted to throw away these superseded objects which had once been so powerful. Against one outer wall of the God Storage Unit lean two paganistic-looking bound straw crooks. These are Inanna’s “Gates of the Underworld”, and to be precise one of them was leaning against the temple and the other was on its side, in a way I actually found faintly shocking once I realised what they represented. Is this the Gates of the Underworld “in storage” after a lifetime of use? What happens to the magic space between them, the entry to Underworld presumably, if one of them is lying on its side? Does the wave collapse? Is it dangerous? In this way, Hooper’s work gets elegantly at the idea of investing objects with power and narrative and then outgrowing that narrative and discarding the formerly powerful object, which is essentially what human beings have always done and what archaeologists seek to reconstruct.

Around the God Storage Unit, other artefacts littered the space. The lustrous brown plait peeping tragically and tantalisingly from under one of the shelving units was one of the objects that spoke most directly to archaeology – something half-hidden, newly exposed, waiting to tell a story, or rather have stories imposed upon it. The artists apparently spent eight hours wandering the British Museum in preparation for this exhibition and got a shock from the beautifully preserved hair of a young woman buried in the great death pits at Uruk. At intervals in the walls around the space and away from the God Storage Unit itself, Maria Loboda had set tiny dabs of gold, a reference to the gems set into the walls of the Alhambra palace apparently with the specific purpose of impressing distant future generations should the unthinkable happen and the Empire collapse. This is a ruler reaching forward in time, trying to avoid the fate of Ozymandias by facing the probability of collapse head-on. Loboda in her interview points out that there the actual physical works she has created are in some ways superfluous to the art itself – the story of the gems is what matters. Another piece that is pure story were her Samurai swords on a distant wall – stored as they were in Japanese households “for an uncertain future”. This is an evocation of what you might call living archaeology (or anthropology, as an anthropologist would put it), the study of objects that are used in a particular way contemporaneously. As archaeologists we can watch modern spaces and actually see objects being deployed to create meaning, and the fond idea is that this informs our practice in the field, where the deployment occurred millennia ago and is no longer visible. 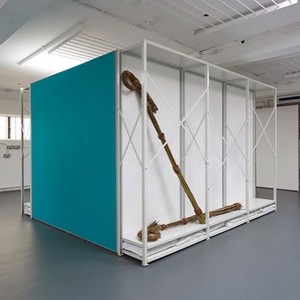 One of the things that blows your mind very early on as an archaeology student is the realisation that you find objects where they ended up. And that might be “in use”, captured in the act of being deployed so that interpretation seems deceptively simple – Pompeii is the classic example – but it might also be after several lifetimes of other use. It might be repurposed, and in fact I am being disingenuous about Pompeii, because plenty of the material and objects there will have known multiple lives. It might be curated – there is at least one example I remember of an Upper Palaeolithic “antiquarian” who collected and curated a set of objects dozens or hundreds of years old and stored them together, where they were found. It might be rubbish, and you might find it in a midden, in a context that says little about the life of the potsherd, or coin, or discarded tablet before it became rubbish. Or, like the objects in Uruk’s original God Storage Unit, it might occupy a space somewhere between rubbish, repurposing and curation.

In the sense that the works referenced all these possibilities, I felt the exhibition was a success. The artists’ point was that Things can (figuratively) outlast their own lives and (literally) those of their owners. People, and their views about their Things, are really pretty ephemeral. Recalculation and reinterpretation occur continuously and come up with new temples, new gods, new meanings. As such it was fitting that one outer wall of the God Storage Unit was painted with the Colour of the Universe (Erratum), the rather jolly turquoise blue that enjoyed the distinction of being the distilled colour of the universe for a whole week, before it was realised that there had been an error in the calculations, and the colour of the universe was reset tragically to a beigy off-white.

Hooper and Loboda have thought deeply about archaeology and become immersed not just in individual stories and sites, glittering and alluring though these are, but in the theoretical context. Being aware of the pitfalls of interpretation and the difficulty of reconstructing meaning is a core concept in post-processual (by which I mean, oh, the bit after 1982) archaeology. Did it teach us anything we didn’t know in theoretical terms, or prompt us to think differently about the things we did know? Nope. I wouldn’t have said so. If anything it was rather comfily reinforcing. And this is where the analytical hard hats come in, because I suppose what I was hoping for was to be shown something new. There is a whole seam of co-operation between art and archaeology which can be very fruitful and spark new approaches to “doing” archaeology. This exhibition didn’t make it into that category. Maybe it wasn’t quite for us. 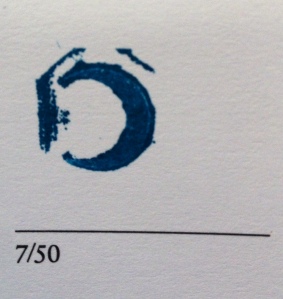