“Genius is an error in the system” – Paul Klee 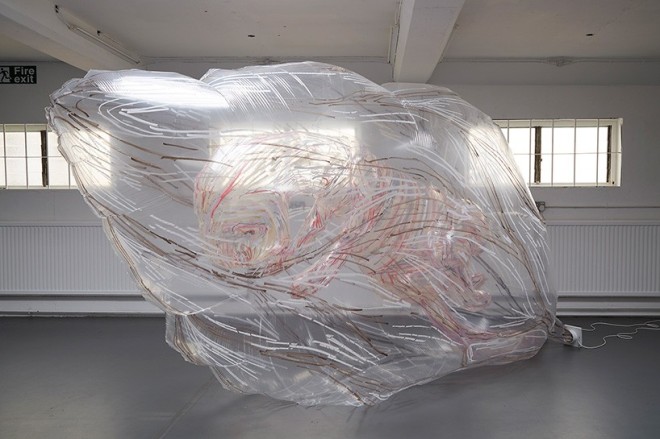 The Birth of the User is two inflatable sculptures in one: a figure, called the User, within an outer womb: a space within a space (within a space). As the outside structure inflates with air from the machine the pressure of the environment compresses the User and a struggle occurs between them which is only resolved when the mechanical air inflow switches and the structure within starts to inflate, which causes his uterine environment to start to collapse around him. This creates a glitchy ecosystem of one against the other: fighting for air, or fighting because of the air. Balance is not consistently maintained.

People going into the gallery can’t help but touch it, which adds another feedback loop. You can feel the inflatable structure resist your hand as the air pushes back against your fingers or when it bucks and yields to your prodding.

Design duo El Ultimo Grito is Rosario Hurtado and Roberto Feo, who have created this sculpture The Birth of the User during Week 33 of Fig-2. Rather than displaying finished works at the start of the seven day show, they set the ICA studio space up as a workshop in which to improvise and develop ideas and create a unique Open House setting in which the public could interact with a production environment. 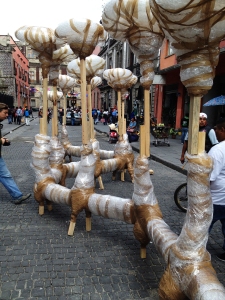 A fantastic illustration of their working methods is their account of creating a public seating installation in Mexico City. It’s fascinating to see the skeleton-and-muscle structure made of bubblewrap and foam taped over plywood that looks like junk (“when we left the first day [they asked] ‘are you going to leave this here? for how long? what is this for?’”) transformed by the addition of a skin of circular stickers into something bright and brilliant.

Their spidery fantastical sculptures are colourful and tangly and semi-organic looking and are often designed to be sat upon and interacted with in public spaces. The use of ‘packing materials’ comes from a decision they made to create a design and manufacturing system free from “traditional methods of production” using their hands and bodies and readily available inexpensive materials: a DIY aesthetic or rather a design aesthetic with a DIY implementation.

“It was a week of work in progress. Mainly to develop ideas and works that explore the idea of glitch, glitch as a malfunction in the system that allows you to see the structure in the system, how the system works,” El Ultimo Grito explain in their audio interview with Fig-2. There is a day-by-day written account by El Ultimo Grito on the designboom website.

The show included a number of digital prints developed from images created by encountering ‘glitches’ in Apple Maps while walking around London. This is similar to Clement Valla’s project documenting ruptures in Google’s Universal Texture mapping system: those images of melting bridges when the texture mapping has gone wrong. We encountered this in Fig-2 Week 12 (part 6) and one of Valla’s ‘Postcards from Google Earth‘ was on show in Week 29. The phenomenon has clearly struck a nerve. 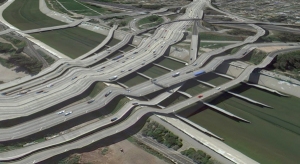 In Clement Valla’s work ‘glitch’ exposes the algorithmic principles involved in how our digital realities are constructed. El Ultimo Grito are more interested in the political and social factors exposed by ‘glitch’: the historicity of glitch. We are in the middle of both a housing crisis (caused by our rich keeping supply of housing down to boost what they can charge us to buy or rent) and a migration crisis (caused by our rich selling weapons to indiscriminately arm every side of every conflict worldwide, which leads to people trying to flee these places to survive).

The construction and reconstruction of our cities is a document of political will. There’s no social housing, but ugly cheesegraters keep springing up in the city. Estates are knocked down, and spring up again as megastructures of gentrification. Sometimes our maps won’t update in time, and we will experience ‘glitch’: an uncanny sense of displacement, walking through two different realities at once, two different periods of history.

With the accretion of vernacular building in a city we in fact find countless levels of periodicity simultaneously. A new glass structure bolted to a medieval wall dominated by a prefab made of ugly. Each layer reveals the ‘ultimo grito’ of its period. Currently everything is glass that is largely flat, the next fashion will probably find this bending and twisting as new technologies develop, and then there’ll probably be some rage for sixties style stone cladding. 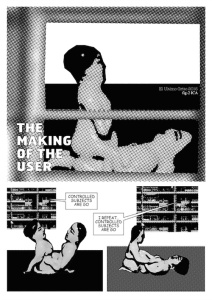 These architectural paradigms (fashions) are temporal but internationally uniform, and part of El Ultimo Grito’s method in their week was to render a number of different but recognisable styles together to create the forms and surfaces of a single United Estates conflated from images of London’s ‘iconic’ Brutalist housing block Trellick Tower, other buildings in Montevideo, and London housing estates. The United Estates sprang up over the week as a number of structures representing a glitched dystopic city that you can’t live in, just as you can’t live in a city without housing or a country refusing to accept immigrants.

El Ultimo Grito‘s fictional character The User is intended to represent “when the consumer becomes a citizen”. The sculpture’s rise and fall that dramatizes the pressure of an environment over the individual. El Ultimo Grito developed their DIY approach to the construction as well as just the design of their works. If each of us is ‘The User’ it is up to each of us to try to take a more active role in it, becoming a citizen rather than a consumer Otherwise the larger structure will crush us all.

The Fig-2 website gives a day-by-day photographic account of the work in progress, in which you see the elements of plastic and wood used to make the nascent sculptures. When I visited on Friday night there was a smell of paint so strong that even I could smell it, Rosario and Roberto working and another guy making things in the fire escape. They had just about finished making a camera obscura, which they demonstrated to me.

The camera obscura projects an image upside down on a screen. Vermeer probably used one when he painted and there’s a good one in Bristol that let’s you look at the Avon Gorge and Clifton Suspension Bridge without having to go to the effort of looking directly at them (you have to go to Bristol though). It’s another form of mapping, another way of projecting a 3D reality onto a flat screen. 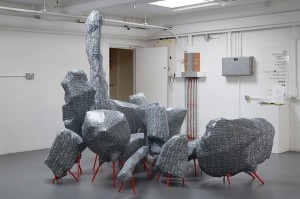 The camera obscura is a kind of ‘real time cinema’ in which a moving image is antique Chinese erotic porcelain depicting a couple rutting, which doesn’t look dissimilar to the Birth of the User sculpture. In the logic of the show it bridges between the scale of the third day’s large inflatable sculpture and the comic strips they made on the final day in which they synthesised all of the glitch mapping of the digital prints and the three-dimensional sculptural forms of the United Estates, with the User character ultimately triumphing and creating a new reality: “If you control the glitch, you control reality itself” — el ultimo grito!

In Iain Sinclair’s lecture Blake’s London: The Topographic Sublime the earnest psychogeographer describes how there is “a love of the fabric of this multidimensional city and also a cynical despair at the changes now being wrought … New enclosures, blue fences and razor wire topped with surveillance cameras, have sealed off enormous tracts of terrain along the eastern margin. We see the dominance of the virtual over the actual, the computer-generated version over the particulars of locality … What you are creating, in effect, is an electronic Golgonooza. A system predicated on affectless gazing. Therefore Los stands in London building Golgonooza,

Compelling his Spectre to labours mighty; trembling in fear / The Spectre weeps, but Los unmov’d by tears or threats remains. “I must create a System or be enslav’d by another Man’s. / “I will not Reason & Compare: my business is to Create.” 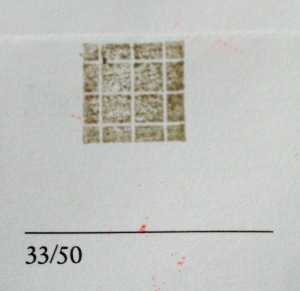 POSTSCRIPT: I made a mistake and accidentally posted this while I was tagging it with “glitch” with the result that the title came up as Week 33 – August 17-23 – El Ultimo Gritoglitch, — a meta-glitch I’m tempted to reinstate.

AJ Dehany is based in London and writes independently about music, art and stuff. ajdehany.co.uk View all posts by ajdehany